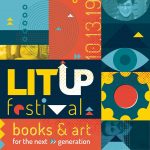 Knoxville-based 3RP author Julia Watts was thrilled when she was invited to her hometown’s inaugural LitUp Festival, to be held October 13 at Knox County Public Library. The event is slated to be the Knoxville edition of a growing nationwide series of literary festivals aimed at encouraging teens to read. While Watts has read at library-sponsored events in the past, being a part of this larger festival—with its broader outreach to teens—was an exciting proposition.

Late on Friday, August 30, Watts was surprised to learn that she had suddenly been uninvited from the festival, and her name removed from its website. The reason? Allegedly, one of the adult festival coordinators was fearful that her adult lesbian erotica fiction was not suitable for teens. Of course, she was not planning–at all–to address or read from any of her adult books at a teen literary festival.

Per the library’s statement:

We looked for authors representing diverse genres in teen literature including LGBTQ authors. Julia Watts was invited to present. It later came to our attention that some of her work is described as erotica and is inappropriate for teens. Based on that alone, the Library decided to change course. We have reached out to Ms. Watts to offer our sincere apology, and deeply regret this situation.

Watts is a renowned author of ten award-winning novels about LGBTQ teens growing up in Appalachia. Her 2001 novel, Finding H.F. won the prestigious LAMBDA Literary Award for Young Adult fiction, and her most recent novel, Quiver, was a 2018 OKRA Pick by Southern Independent Booksellers Alliance, and received a Perfect Tens Award from VOYA (Voice of Youth Advocates) journal. Catholic Library World raved that Quiver was a “contemporary gem . .. [that] touches on many society divides including ideology, religion, and sexuality. . . As it deals with such a socially poignant topic, this novel is well placed in high school collections and public libraries alike.”

While Watts has also written adult fiction—similar to many authors known for their children’s work, such as Roald Dahl—her focus at the teen festival was solely her young adult work. The festival may have been concerned that her adult work was lesbian erotica fiction. “They suggested that I could perhaps read at a separate event, but did not want me to be a part of the festival itself.”

Kat Georges, co-director of Three Rooms Press, was stunned by the suggestion. “This is segregation, pure and simple, by a public, taxpayer-supported institution. It’s unacceptable and discriminatory, and is a throwback to an intolerant time where ‘separate-but-equal’ was the unfortunate norm.”

Increasingly LGBTQ young adult authors are being banned by middle and high school event coordinators. According to an August 19th article in Entertainment Weekly which detailed experiences similar to Watts’ throughout rural and small-town America, “In spite of progressive advances in children’s literature, LGBTQ voices are being censored.”

Watts is still hoping the festival organizers change their minds and reinvite her. “I’d gladly accept,” she said. “The whole reason I write is to make a change for the better by showing kids from rural and small towns that being lesbian or gay is not a choice and is not wrong. It’s just who you are. Knowing this can change a kid’s life for the better. It could even save a kid’s life.”