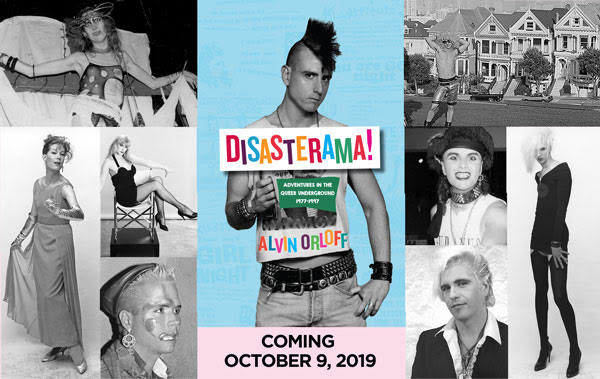 In anticipation of the October 9th release of DISASTERAMA!, we’re happy to present a conversation between the author, Alvin Orloff, and another fantastic TRP author, Meagan Brothers. Meagan is the author of the award-winning LGBT YA Novel WEIRD GIRL AND WHAT’S HIS NAME and more. Below, she speaks with Alvin about the writing of memoir vs. novel, writing through trauma, and more. Read to the end for a DISASTERAMA! mixtape from Alvin to all TRP readers.

MB: Hi, Alvin! Let me start by saying how much I loved Disasterama! Tell me how you started the project – was your decision to write a memoir of coming of age as a gay man in the 80s and early 90s a personal one, or, given that we’ve once again got a conservative “celebrity” president in office, was there also some political motivation to speak your truth now?

AO: I wrote Disasterama! for five reasons. First, I thought my youth had the makings of a good story: life-and-death drama, peculiar characters, morally ambiguous conflicts, comical subplots. As a writer, I couldn’t pass up the challenge of seeing if I was capable of turning them into a readable memoir. Second, I honestly think my departed friends deserve to have someone telling their stories and singing their praises. In a courageous act of existential rebellion, most of them absolutely refused to play the tragic roles assigned them by fate, remaining fun and funny right up to their untimely deaths. Third, I wanted to ad some color and texture to the historical record. One can’t get an idea of what it was like to live in a past era from just reading the headlines, one needs to immerse oneself in the subjective experiences of ordinary people. Fourth, I did have a political agenda, though it had nothing to do with the current president (I started writing Disasterama! in 2008). I hoped that activists interested in cultural resistance might find the strategies we used back in the day interesting and/or inspiring. Fifth, I’m a bit of an egotist and I really enjoy talking about myself!

MB: After writing multiple novels, did you find that, with memoir, your approach to writing changed?  If so, how was the process different?

AO: Writing a memoir uses an entirely different part of the brain than writing fiction, and it’s not just the obvious use of recollection vs. imagination. In fiction you can concoct a plot and order events as needed, but in memoir you have to take a whole bunch of things that were happening simultaneously and break them into discreet chapters, then jimmy them into a plot. It requires organizational skills and it’s super-hard! And since I didn’t want to concoct my description of the queer underground only from my own subjective impressions, I did a half-dozen formal interviews with peers who’d lived through the same era.

MB: Though you say from the outset that you want to celebrate the “riot of rococo rebellion” that you and your friends undertook, you acknowledge that this is also a memoir of living through the AIDS crisis. I imagine that you must have had to re-confront a lot of loss, and that this must have been extremely daunting and emotionally draining at times. For others who are trying to write through trauma, can you speak to the difficulty, and/or to the healing power, of memoir?

AO: Oh gosh, thinking about my dead friends filled me with dangerous levels of melancholy before before, during, and after the writing of Disasterama! so I’m not sure about the healing power of memoir when it comes to trauma. It did have a therapeutic effect in another way, though. I’d always been embarrassed and ashamed about much of my past fecklessness. In writing the memoir I realized my character flaws were endemic to youth and I can now laugh at them as amusing foibles rather than regarding them as indelible stains.

MB: I found a lot of inspiration in you and your friends’ pursuit of artistic freedom and defiance in the face of terrible odds. For younger readers who are just learning about this time in LGBTQ history, what lessons or new perspectives do you hope they take away from your book?

AO: I suggest to younger readers that fame deserves to be more evenly distributed (just like money and privilege). So, definitely set up your own star system in which you and your friends are every bit as important (to you if no one else) as whoever’s being pushed by Hollywood or the music industry. Also, life is more fun when everyone produces, as well as consumes, culture. So get out there and create, even if nobody gives you money or encouragement!

MB: And finally, from Petula Clark and the Monkees to Nina Hagen and New Order, this book has an amazing soundtrack! If you were to make us a mixtape, what would be the absolute essential songs you’d put on it?

AO: OK, here’s a playlist for reading Disasterama! Not all the songs are mentioned in the book, but they’re all in there for a reason. If you want to know the reason, just ask me out for cocktails and I’ll tell you.