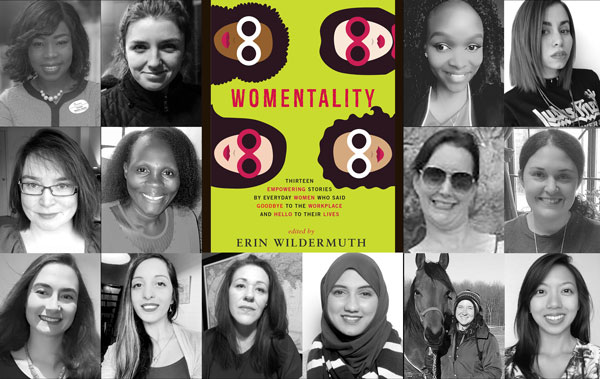 Womentality: Thirteen Empowering Stories by Everyday Women Who Said Goodbye to the Workplace and Hello to Their Lives is a collection of powerful essays by thirteen women across the globe who decided to leave the traditional workplace and strike out on their own. Their motivations and methods vary, but they share a desire to be independent and in control—and all are able to accomplish this thanks to an internet connection and a strong sense of ingenuity. Erin Wildermuth put this collection together. Three Rooms Press editor Kaleena Fraga sits down with Erin to talk about what motivates women worldwide to leave the 9-5:

KF: Where did the idea for Womentality come from?

EW: The idea of Womentality came from my own transition away from traditional employment. I had been interested in the future of work for a long time, certain that it would allow people more freedom over their own lives without giving up financial stability. At the same time, I was unsure about how to transition out of a full-time, salaried position while still supporting myself.

I was surprised how easy it was and frustrated with myself for taking so long to take the plunge.

Most books on escaping the rat race are written for people who already come from wealth. They talk more about leveraging wealth and successful investing than turning passions into modest, sustainable paychecks. Passive income is the big buzzword. They are written by and for an elite, which makes regular people feel like working for themselves is out of reach. I can’t imagine how compounded this feeling must be for people born into less prosperous economies than we have in the United States.

At the same time, the big-money, passive-income entrepreneurship often written about in these books is economically problematic. These people are often not creating wealth. Much of the tactics taught are the equivalent of real estate investing. People are using their economic status to put the down payment on a home and waiting twenty years while someone from a lower socioeconomic background pays their mortgage. Is that really the kind of economics we want to encourage as a society?

KF: How did you find the contributors for this book?

EW: I had returned to the United States and was making a living as a writer when I began compiling these stories. Upwork, a platform that connects freelancers and clients, had helped me to find several great clients. I put out a call for on the site and sifted through applications. Most of the writers featured in the book replied to this call.

KF: What were some challenges of putting the book together?

EW: The most challenging thing about putting this book together was my commitment to telling stories from international women who were not necessarily writers.  The writers I hired to pen chapters turned in beautiful prose…The other chapters required significant editing, both in terms of English and narrative flow.

That said, there was nothing better than the responses I got when my authors read and approved my edits. They were so excited to be telling their stories and so thankful for my role in making their prose pop, as one woman put it. The excitement was, and continues to be, truly contagious.

KF: Who should read this book? Why?

EW: Anyone who is unsatisfied with their current work-life balance. Anyone who wants to use our economy to break out of traditional employment and is looking for inspiring stories from everyday women who successfully made this shift.

KF: Why do you think leaving the 9-5 is especially beneficial for women?

EW: Women would benefit most from a system in which both men and women eschew traditional employment and share equally in the joys and chores of living. That said, leaving the 9-5 is arguably essential for women who are entrenched in a patriarchal society that is unlikely to change in our lifetimes.

Beyond the physical toll of birthing children, the lion’s share of raising families still fall to us. More housework falls to us. The mental toll of planning the details of living falls to us. Though these tasks are more equally shared than in the past, it is unbelievable to hold down a 9-5 job while also taking responsibility for the innumerable chores of modern living. There is a reason no one wants to “adult” anymore. Adulting has become significantly harder without a full-time household manager.

At the same time, many workplaces don’t value the attributes that women have fostered to excel in our communities. Employees who take on collaborative work (often women) and acknowledge others’ efforts are passed up for promotions while those who overstate their own successes rise in rank. Women are told to change — to “lean in” — while men are seen as faultless in their tendency to exaggerate their accomplishments and abilities.

The gender pay gap and, perhaps even more telling, the opportunity gap that leaves women out of executive positions indicate that traditional employment doesn’t work for women.

KF: Do you have any advice for people who want to leave the 9-5?

EW: My main piece of advice, and something reiterated in Womentality, is that there is more than one way to successfully navigate self-employment. You can jump in with both feet or build up a side business cautiously alongside a traditional job. You can be creative or stick to tried and true opportunities. Make a plan and start. The first step is often the hardest.