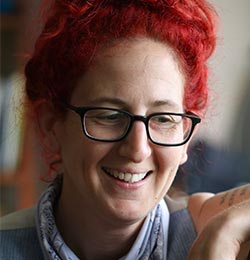 When I was twelve, my mother tried to commit suicide. It became the benchmark of my existence. The before and after. A few years later, I tried to kill myself and spent the next years of my life in and out of hospitals trying to find a way out.

Growing up, I was always searching for some sort of map, a directional guide to understand myself. This searching led to drugs and a lot of poor decisions. Rehab at nineteen, two relapses after that, and I am still trying to learn how to find my wild without risking my life.

When I started writing this novel, I birthed a character that I wished I could be when I was that age: strong, articulate, bold. Eleanor embraces life, even when it is dark and unkind. She risks friendships to be herself. It took me a long time to even get close, and I am still getting there.

I was having breakfast with my dad last week and he asked me when I knew I was gay. I told him that I didn’t have an age when I knew because there was so much trauma in our house that I wasn’t thinking about my sexual orientation. But in 1997, when Ellen came out on the cover of TIME magazine, something shifted in me. I became obsessed with this news. I couldn’t believe it. Friends asked me why I cared so much. I couldn’t yet articulate why, but it mattered. Back then, we didn’t have shows like Will & Grace. Celebrities didn’t openly come out. There wasn’t LGBTQ literature like there is now. It took me awhile to find my vocabulary and I am still searching for it.

There is a bit of me in every character and as I have been writing and rewriting this story, it has changed as I’ve changed. James is very loosely based on a boy in my high school who committed suicide when I was a senior. I barely knew him. I don’t think we ever spoke to each other, but I remember being in Saturday detention and hearing boys behind me talk about it. I went home, ran up to my bedroom and cut all my hair off. Back then, I didn’t understand why I was so upset. Years of therapy and living helped me to realize I was jealous. He succeeded at what I was trying to do for years.

Over the years, my own mental illness has fluctuated. I marvel at the ways in which we speak about mental illness now. When I was in high school, people made fun of me. I remember one boy making fun of my scars, saying he wished I could just kill myself already. There was no sensitivity about it or “safe spaces” or trigger warnings or any of that political correctness as there is today.

Now, every poetry reading I go to, someone openly talks about their mental illness. I am amazed at how far we have come with our ability to destigmatize this. But there is also a part of me that feels sad that I didn’t get to experience that when I needed it. It took me a very long time to only speak about my traumas, what I have done to myself, what has been done to me. Part of writing this book, was to create lives who are hurting, but surviving.

Eleanor, even amidst the trauma of her mom trying to kill herself, is strong. She is troubled by the language of herself, but meeting Aggie and Reigh and even Flor help her to realize the capacity of her strengths.

It would not have been safe for me to come out in high school. Now, there is more support.

This book has probably been inside me since Eleanor’s age, but I started writing it in 2006, very on-and-off. It has taken many shapes and Eleanor has shifted quite a bit. Initially, Shirley (Eleanor’s mom) was extremely dark and not approachable at all. I needed to get past some of my own hurt and anger toward my mother in order to humanize Shirley. When I rewrote this for the last (I hope) time, I started to recognize some of my own forgiveness toward my mom through Eleanor.

I needed to take this long to complete this novel. It needed this much time to breathe and fully gather its blood and guts.