↓
Home→Book Deals→Eight Summer Reads for the Book Fiend in You!
Share This! 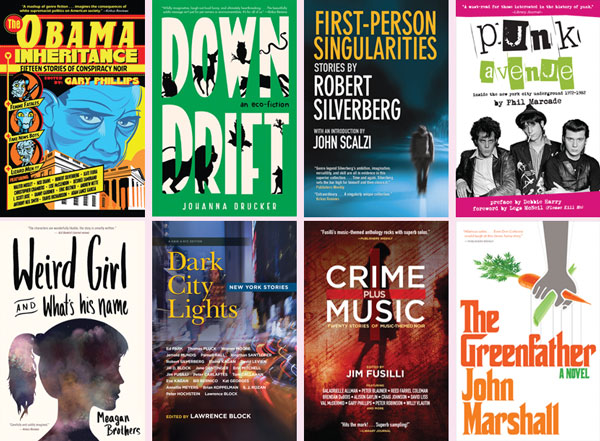 Ready for some summer reading? Do it the Three Rooms Press way. Here are our top suggestions for the beach, the balcony, or the bed. All titles are available as ebook or print editions so you can get comfy with whatever your preference is. Enjoy!

THE OBAMA INHERITANCE: Fifteen Stories of Conspiracy Noir
by Gary Phillips
Want to harness the desire to change the sphere of political turmoil? Take in 3RPs bestselling THE OBAMA INHERITANCE: 15 Stories of Conspiracy Noir edited by the king of pulp Gary Phillips with contributors like Walter Mosley, Nisi Shawl, and Eric Beetner riffing on the many outlandish conspiracy theories about President Barack Obama.

DOWNDRIFT: An Eco-Fiction
by Johanna Drucker
Not all summer reads need to be lightweight! If you want a fresh, weird look at the coming environmental changes to the world check out DOWNDRIFT, an eco-fiction by noted social scholar Johanna Drucker. You get a 3.8 billion old species for a narrator plus alternating of the travels of a house cat and a lion as they wander through a world in which animals have started to take on human characteristics. Wild and wonderful—and a little scary.

FIRST-PERSON SINGULARITIES: Stories
by Robert Silverberg
For the ultimate sci-fi selfie, check out the career-spanning collections of short stories by beloved genre Grand Master Robert Silverberg, in which every story is written in the first person. Narrators include a lovestruck dolphin, a Greek god transplanted to modern day New York, and a sci-fi writer in search of the meaning of life. Perfect for the beach—or the mirror.

PUNK AVENUE: Inside the New York City Underground 1972-1982
by Phil Marcade
Of all the many tomes on punk rock’s glory days, this is one of the best. Author Phil Marcade unleashes a torrent of stories about hanging with the likes of Debbie Harry, Mink DeVille, Bob Marley, and his close pal (and bandmate!) Johnny Thunders in the heyday of the NYC punk scene, with lots of laughs about a scene where everyone was broke and just into creating.

WEIRD GIRL AND WHAT’S HIS NAME: A Novel
by Meagan Brothers
Ready to fall in love with geeky, lovable characters and beautiful, smart writing? This LGBT YA novel revolves around the friendship between Lula and Rory, two self-claimed geeks obsessed with The X-Files who feel they’ll never fit in with anyone else. When suddenly Lula begins to discover that Rory is hiding things from her, their friendship is disrupted–and then she disappears into the middle of the night. While you’re following along with their relationship, first through Rory’s perspective and then through Lula’s, you’ll fall in love with the characters and wish they could come out of the book to join you for your next Netflix binge, especially if it’s the X-Files.

THE GREENFATHER: A Novel
by John Marshall
And if you need an offer for a book you can’t refuse –then read THE GREENFATHER by comic genius John Marshall with an outrageously funny plot that will make you take the book and leave your cares behind. You’ll never read a more hilarious novel.

BONUS!
THIS WAY TO THE END TIMES: Classic Tales of the Apocalypse
edited by Robert Silverberg
What better way to enjoy your time on the beach than to read about the apocalypse? This Way to the End Times is a collection of twenty-one short stories, hand-picked by Science Fiction Grand Master Robert Silverberg, that includes tales by Jules Verne, James Tiptree Jr., Ursula K. Le Guin, and many other award-winning authors. Reading about the final and complete devastation of the Earth in such an enthralling way will leave you happy that you still have the crashing waves in front of you and the hot sand beneath you.