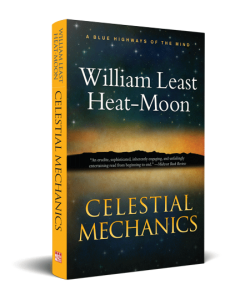 SCROLL DOWN AND ENTER TO WIN
ONE OF FIVE (5) FREE COPIES OF CELESTIAL MECHANICS NEW PAPERBACK EDITION.

In CELESTIAL MECHANICS, William Least Heat-Moon embarks on an exploration into the value of knowledge and rational thinking, the essence of being harmoniously alive, and the very nature of the Cosmos. The novel has received rave critical reviews, and is a finalist for the Foreword Reviews 2017 Indie Book Award for Fiction!

William Least Heat-Moon, pen name of William Trogdon, was born of English-Irish-Osage ancestry in Kansas City, Missouri. He holds a bachelor’s degree in photojournalism and a doctorate in English from the University of Missouri. Among his writing credits, he is the author of Blue Highways, which spent 42 weeks on the New York Times bestseller list. His five major books and the recent Writing Blue Highways have never been out of print.

“William Least Heat-Moon has taken a story of people making choices incompatible with their own desires and natures and given us a travelogue of the spirit. The trajectories of these three people, each one trying to find their place in a cosmos crowded with distraction and uncertainty, reveal the geography of the self and the gravity of choice. . . . A road trip of souls.” —The Proximal Eye

“As mysterious and stirring as a midnight snowfall, Celestial Mechanics invites the reader to ponder their role in the Universe along with the truth-seeking protagonist. Author William Least Heat-Moon is a novelist with a genuine flair for original and deftly crafted storytelling.” —Midwest Review of Books

Sign up here. No purchase necessary
This is the new paperback edition of CELESTIAL MECHANICS. Open to residents of the fifty United States and the District of Columbia, age 14 or older.

Sweepstakes begins April 2, 2018. Entries must be received no later than April 9, 2018 11:59:59 PM Eastern Time. Winners will be selected on or about April 10, 2018. LIMIT ONE ENTRY PER PERSON. Anyone entering more than once will be disqualified.