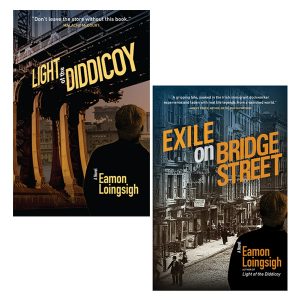 This October will be the one-year anniversary of the release of Exile on Bridge Street, the second novel in Eamon Loingsigh’s Auld Irishtown Trilogy. This historical saga follows teenage Liam Garrity as he tries to eke out a life for himself and his family among the Brooklyn Irish waterfront gangs in turn-of-the-century NYC.

To celebrate, we’re offering a special DOUBLE backlist feature! For the entire month, Light of the Diddicoy and Exile on Bridge Street will be packaged together on our website, at a discounted price of $20, through October 31, 2017.

Book Details:
Light of the Diddicoy
Light of the Diddicoy is the brutal saga of Irish-American gangs on the Brooklyn waterfront in the early part of the twentieth century, told through the eyes of Irish immigrant Liam Garrity. Forced at age 14 to travel alone to America on the eve of the 1916 Easter Rising, Garrity stumbles directly into the hard-knock streets of the Brooklyn pier neighborhoods run by Bridge District gang The White Hand. In the industrialized enclaves where Famine Irish settled a generation earlier, Garrity has no choice but to use any means necessary to survive within the clan-like loyalties of the gang, and carve out his place in a no-holds-barred world of a community living outside the law.

Exile on Bridge Street (Shortlisted for the Langum Prize)
Exile on Bridge Street details teenage Irish immigrant Liam Garrity’s struggle to adulthood in pre-Prohibition Brooklyn. Back home, Ireland’s fight for its own independence erupts with the 1916 Easter Rising. The fate of Garrity’s father, an Irish rebel, is unknown, which leaves his mother and two sisters vulnerable on the family farm as British troops swarm, seeking reprisals. Garrity must organize their departure to New York immediately. In Brooklyn, Garrity is adopted by Dinny Meehan, leader of a longshoremen gang based in an “Irishtown” saloon under the Manhattan and Brooklyn bridges. Meehan vows to help Garrity and his family. But just as Ireland struggles for independence, Garrity faces great obstacles in his own coming of age on the violent Brooklyn waterfront. World War I, the Spanish Influenza, the temperance movement, the rise of Italian organized crime, police, unions and shipping and dock companies all target the Brooklyn Irish gang and threaten Garrity’s chances at bringing his family to New York. When “Wild Bill” Lovett, one of the gang’s dockbosses vies to take over, both Meehan and Garrity face a fight for survival in New York City’s brawling streets mirroring Ireland’s own fledgling independence movement.

Compelling writing by a master of historical fiction, as evidenced in the author’s critically-acclaimed prequel Light of the Diddicoy.

Praise for the Auld Irishtown Trilogy:
“A grinding tale of death and survival.” ―Publishers Weekly

“Not only a chronicle of a people, but also the story of one lonesome immigrant, struggling to survive in a frightening land . . . William Garrity is a great character, a teenager getting by (just barely) by the power of his courage and wit, and a tormented soul who is forced to make terrible choices without looking back.” ―LitKicks

“Loingsigh has an urgent story to tell. And he tells it well . . . Loingsigh’s great strength is his unsentimental take on the immigrant experience which―despite the rancor of today’s debate―often acquires a sepia tone when it is discussed in the past tense. EXILE ON BRIDGE STREET should be required reading for those who rail about how today’s immigrants ‘refuse to assimilate.’ ”―Brooklyn Rail

“In his beautiful, passionate prose, Loingsigh ― an Irishman himself ― continually reminds us of the motherland and the suffering of Irish emigrants. . . . EXILE ON BRIDGE STREET is a gangster story that reads more like “Robin Hood” than The Godfather because of these men’s inner strength and the love they have for each other. . . . It’s also an intimate look at criminals whose lives have been hardened by oppression and weathered by storms, while inside their rough shells they hide soft hearts.”―Washington Independent Review of Books

“When accomplished Irish American writers address the lives and experiences of the early 20th century Irish in New York they are recording, but also in a deeper sense reclaiming, a lost heritage. This is painstaking work that’s worth celebrating in its own right, but then to give us a vivid portrait of these flinty people in all their complexity and courage is a thing to cheer about. EXILE ON BRIDGE STREET . . . is a high wire act of creativity and reclamation that deserves the widest possible audience.”―Irish Central