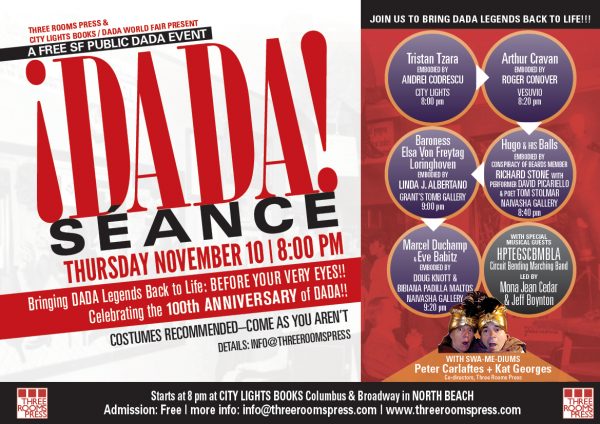 Luminaries of the 100-year-old Dada art movement, including Tristan Tzara, Hugo Ball, and Marcel Duchamp, will be conjured “back to life” in galleries and bars of San Francisco’s notorious North Beach neighborhood on Thursday, November 10th during a Dada Séance and Parade hosted by Three Rooms Press, publisher of the the annual MAINTENANT journal of contemporary Dada writing and art.

The event is part of the Dada World Fair, a two-week long celebration of the 100th anniversary of the Dada art movement, organized by City Lights Books. The séance is free and open to the public.

The group will move on to Vesuvio bar at 8:20 pm to conjure up Dada poet/pugilist/provocateur Arthur Cravan, embodied by legendary MIT Press editor Roger Conover, accompanied by a wheelbarrow full an English translation of the original insolent MAINTENANT journal, first published by Cravan in 1913.

The séance tour then parades up Grant Street and touches down at Naivasha Gallery (Grant Street at Union) at 8:40 pm, to conjure Hugo (and his) Ball(s), embodied by Conspiracy of Beards member Richard Stone, accompanied by actor/performance artist David Picarello and poet Thomas Stolmar, who will bring an a cappella new twist to Ball’s acclaimed Dada poem “Karawane.”

The séance tour will proceed back to the renowned Naivasha Gallery where participants will help recreate and deconstruct the iconic photo of celebrated dada artist Marcel Duchamp playing chess with the notorious L.A. icon and writer Eve Babitz, embodied by Doug Knott and Bibiana Padilla Maltos.

Throughout the Dada Worlds Fair, copies of Three Rooms Press’ MAINTENANT: A Journal of Contemporary Writing And Art will be featured and available at City Lights.

Costumes are recommended (“come as you aren’t ”). Participants are encouraged to arrive at City Lights by 8 pm, but are welcome to join in at any of the stops along the way.

For additional information, email info@threeroomspress.com or call Peter at 917-443-1695.

About the MAINTENANT Dada Journal