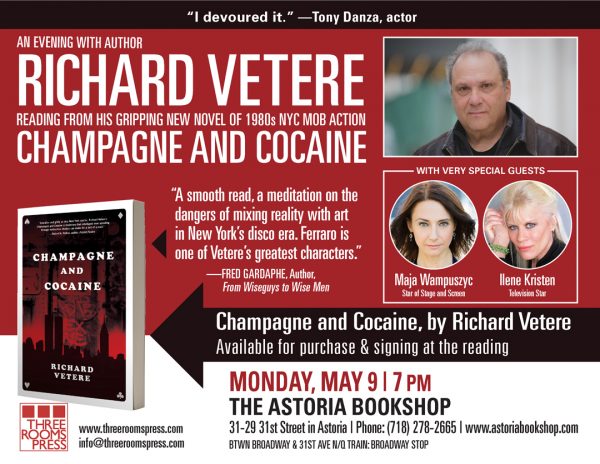 Award-winning New York author RICHARD VETERE celebrates the release of his thrilling new novel CHAMPAGNE AND COCAINE with a reading and signing at Astoria Bookshop on Monday, May 9 at 7 pm. Vetere will be joined by star of stage and screen Maja Wampuszyc and television star Ilene Kristen.

The event will feature the author—whose previous books include The Writers Afterlife and The Third Miracle—reading from his new book and sharing stories about what inspired it. A book signing follows the reading.

The new release has already received rave pre-publicity praise. Author Robert H. Patton (Patriot Pirates and Cajun Waltz) raves, ““Evocative and gritty as only New York can be, Richard Vetere’s CHAMPAGNE AND COCAINE is testimony that intelligent men spiraling through destructive choices can make for a hell of a read.” Edwin Torres (Carlito’s Way), observes, “Vetere’s page turning CHAMPAGNE AND COCAINE oozes vibrantly, written by an author who knew New York City at that time well enough to put his own stamp on its origins.” And famed actor Tony Danza summed it up succinctly: “I devoured it.”

ABOUT RICHARD VETERE
Richard Vetere is the author of three novels: CHAMPAGNE AND COCAINE and The Writers Afterlife (both Three Rooms Press), and The Third Miracle (Simon & Schuster). He cowrote the screenplay adaptation of The Third Miracle for the film by the same name starring Ed Harris, produced by Francis Ford Coppola, directed by Agnieszka Holland and released by Sony Pictures. His plays include Caravaggio and the Pulitzer-nominated One Shot, One Kill. He lives in New York.