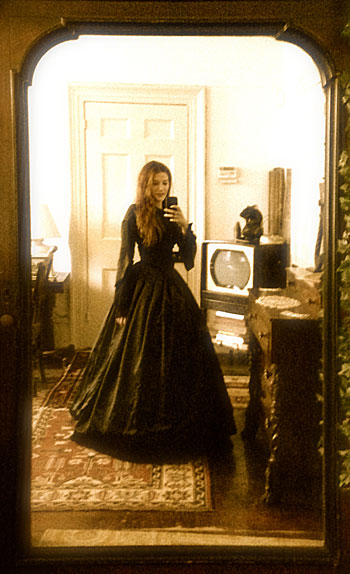 Sometimes there’s magic. That’s how Three Rooms Press co-directors Peter Carlaftes and Kat Georges felt when we were fortunate enough to start working with poet, novelist, editor, and all-around brilliant person, Constance Renfrow. Since May 2014 she’s been the editor-in-chief and creative consultant for 3RP. Most recently, she took on a new role as editor of the forthcoming title Songs of My Selfie: An Anthology of Millennial Stories. In addition, she offers her own private editorial services (http://www.constancerenfrow.com/editorial-services/). And on top of all this, she’s a self-described Victorianist, serving as young volunteers coordinator, graphic designer, and event host at New York’s famed Merhant’s House Museum, a unique time capsule of a typical affluent New York merchant family of the 19th century.

Whew! We were somehow able to catch up with this extraordinary woman to get some answers to some burning questions about what makes her tick, and keeps her going.

Constance Renfrow: In addition to re-reading Songs of My Selfie (gotta catch those typos!), currently I’m reading The God of Small Things by Arundhati Roy. It’s an incredible story about a part of the world I would like to know more about, with such exquisite, spot-on prose.

We’ve gotta ask: What’s your all-time favorite book? And if you were stranded on a desert island with five books, what would they be?

The Count of Monte Cristo—hands down! I feel like most literary types grow out of Dumas by their mid-twenties, but it’s got swashbuckling adventure, revenge fantasies, a total Mary Sue protagonist. I love it so, so much. Also, my copy is about 1,500 pages, so it would probably make for a good weapon in emergencies. It’s important to think about these things.

So that would be number 1. Others would be . . . Jane Eyre, almost assuredly. Guards, Guards by Terry Pratchett, for those days when this desert island gets to be too much and I need a good laugh. Um . . . maybe Robinson Crusoe—he’s gotta have some good ideas for survival, at least, and would keep alive the high romance of being stranded. And then, 5 . . . the Oxford English Dictionary. A) Because it’s several enormous volumes and could probably serve many practical purposes, and B) because I’m a total dork and can spend whole afternoons looking through the dictionary. (Of course, you wouldn’t guess that, judging by how often I say “awesome” and “cool,” but I suppose that’s just my millennial showing.)

Speaking of millennials: You are the editor of the forthcoming 3RP book SONGS OF MY SELFIE: AN ANTHOLOGY OF MILLENNIAL STORIES. What a title! Tell us a bit about how you came up with the idea, and what you hope to accomplish with the book.

My favorite part about that is that title started off as a joke title for an article I wrote about how not to get your book published. . . .

The actual idea for the Quarter-Life Crisis contest/Songs of My Selfie anthology came as the direct result of an article a writer friend sent me (She’s in SOMS! Read her story!)—one of those “older writer explains all to younger writers” pieces. I forget exactly what was said, but the message was essentially that twenty-somethings shouldn’t submit to lit mags or try to get published in any way, because everything we write is crap and we’re too young and too stupid to realize it. And it made me so outraged. So much of the advice for young writers—and millennials in general—is brutally negative. We’re constantly told why we’re selfish and undeserving for wanting to share our work with the world, that we just have to keep our heads down and get out of our twenties, that we’ll suddenly, magically come into our own once we’re in our thirties (note, this is the same thing we were promised during our teenage awkward phase).

But I want to prove to readers (millennial and otherwise) and industry leaders that twenty-somethings are not only capable of writing, but are already writing, some incredibly thought-provoking work in stunning, staggering prose. Ifra Asad has a highly experimental, highly emotive style that digs its fingernails into your arm and tears you into a dismal New York City where every imagining is possible and every interaction has bitter meaning—and it’s clearly in direct response to the quiet, emotionally minimal short stories that are currently being published in the larger lit mags. Tara Isabella Burton’s prose is some of the most powerful I have ever read: every word drips with meaning, every sentence will make you want to stop and reflect—except that her stories drive you forward, so that you can’t help but read more and more and more. Joshua Tuttle’s “On Call” is the shortest in the book, but it delivers a knockout blow that will haunt you for days.

This is the work lit mags and publishing houses are missing out on—these are the stories that are going unread when this generation is waved away on the grounds of age and inexperience. As Kat said to me, Songs of My Selfie is the voice of a generation, and it’s well past time that voice was heard!

You’re an editor. What does an editor do, and why are editors important to the writing process?

I think most writers agree that it can become very difficult to actually see your own work, and that’s where an editor can be helpful. There are several different stages to the editing process—developmental editing, content editing, copy editing, and proofreading—and every story needs each to different degrees. The way I do it at 3RP is I’ll read the book once as an innocent reader to get a sense of the story and the characters and the author’s vision. Then I’ll re-read and make sure the plot makes sense, that the vision comes across, the protagonists grow—all that big stuff. Then the author revises, and I’ll look at it again for more nitty-gritty elements: was this character blonde in the first chapter, but is now described as having red hair? Again more revisions. Then I’ll look at language and fix clunky grammar, moments where the characters break voice, etc.—for most 3RP authors, copy editing is pretty negligible. And then it’s proofreading time. I think I’ve built a reputation for being really harsh thorough—but while there may be blood and tears and blows to the ego, I hope my authors will agree that in the end the piece is better for it.

Editors often work behind the scenes and don’t necessarily get mentioned by name. What are some of your favorite projects that you’ve worked on?

Well, I absolutely loved working on Weird Girl & What’s His Name with Meagan Brothers, if my incessant social media-ing hasn’t suggested that enough. Swing State was my first project with 3RP and one of the first literary books I got to edit professionally; I adored it from the very first page, and Mike was the sort of author editors dream of working with. Though Warriors by William B. McCloskey, Jr., which I edited at my previous company, might still be the book I’m most proud of. This was the prequel to a bestselling series begun in the 1970s, and by 2013 the author was very sick and unable to revise it. So his son and I collaborated to polish what was a fairly rough draft and finish the book, tying off lost plot threads and bringing the writing back up to the level of the rest of the series. I even ghostwrote a scene or two. It was hugely important to me that this book be a worthy final piece to the series, and the reviews seem to suggest that we succeeded in that. It’s even bringing new fans to the series!

You’re also a writer. What have you done, and what are you currently working on?

I am! I’ve done a variety of things—poetry, nonfiction articles, short stories. My story “The Edge of Happiness” will be in Songs of My Selfie, which I’m very excited about.

Recently I’ve been writing a lot of experimental, kind of hyper-emotive poetry and fiction, which is absolutely in response to that other big project I’ve been working on: a Victorian governess novel, in which nobody can ever say what they mean and emotion must be repressed, because . . . society. I’m nearly done with the first draft.

What makes you want to write?

Haha, I always ask this, but now that I’m on the receiving end, I’m realizing it’s kind of a stupid question, isn’t it? Like most writers, it’s true that I’ve always loved writing, but for a very long period there, what I really wanted to be was a visual artist. I used to love creating characters and telling stories through drawing, but ultimately I gave up that goal because I despaired of ever getting the technical skills to recreate on paper the images in my head. With writing, I can be much more precise and in control. But art is still a frequent motif in my writing; an absurd number of my characters are artists.

You ask other folks you’ve interviewed, so we’ve got to ask you: Do you have any writing rituals?

I love asking this question! Mine is very silly, but I’m what I have dubbed a “superstitious writer,” so like, if I was working on my bed when I started a writing project (and got a lot done) I will only work on my bed for the rest of that project. I’ve gotten a bit better about this—particularly for my novel, I can now work really well in three whole places: the train, my kitchen table, and a chair in the living room. The other ritual that’s followed me since my high school essay days is I always have a big glass of ice water, which I promptly chug and refill—it has all the walks and distractions built in!

What do you do for fun when you’re not writing or editing?

Sometimes I sketch—I’ve been embracing the almost cartoony style that I used to despair of. I watch crime shows with my boyfriend and annoy him by figuring out the endings. I love cooking and baking and feeding people. Probably my favorite thing is to go on super long walks through the woods. I’ve also been an avid Victorianist and amateur Brontë scholar for years now, so I volunteer at the Merchant’s House Museum, where they give me pretty nineteenth-century dresses to wear. I recently launched a monthly open mic series here—please come!

What was your playlist for working on SONGS OF MY SELFIE?

“Where Did You Sleep Last Night”— Nirvana

“The Man Who Sold the World” — Nirvana (I’ve gotten really into Nirvana recently, and oddly I think it has something to do with Weird Girl and What’s His Name.)

“Keep It Together” — Guster

“Somebody to Love” — Queen

“Through Her Eyes” — Dream Theater