↓
Home→Author Interviews→The Living Theatre and the Making of FULL MOON STAGES
Share This! 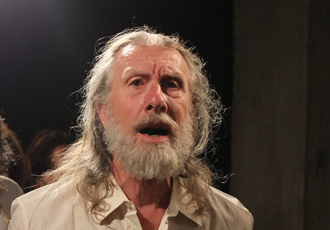 An Interview with Thomas Walker

In celebration of the upcoming release of Judith Malina’s (1926–2015) Full Moon Stages: 50 Years of Personal Notes from The Living Theatre (November 2015, 978-1941110256, $18.95), we sat down with Malina’s longtime friend Thomas Walker, a forty-year veteran of the Living Theatre. Thomas was instrumental in making this project come together, gathering and organizing long archived notes.

3RP: Can you tell us a little about the Living Theatre?

TW: It’s a very long history.  Founded in 1947 by Julian Beck and Judith Malina.  Landmark productions in the late fifties and early sixties of Jack Gelber’s The Connection and Ken Brown’s The Brig. Famous tour of the US in ’68/’69 with Antigone, Frankenstein, and Paradise Now. In the seventies, it was street theater all over the world. Beck and Malina used theater to challenge the culture and politics of an era. Anarchist pacifist and beautiful.

That’s an incredible history. The Living Theatre was clearly an influential force in the counterculture movement. So how did you get started with the group?

I first saw the group in ’68.  Followed them around.  Joined them in Brazil; spent two months in prison there with the company. The charge was being in the presence of marijuana. Never let go after that.

What was your role in the making of Full Moon Stages?

TW: I always knew about Full Moon Stages (known originally as “Full Moon Poem”). A few years ago, [fellow company member] Dennis Li and I worked on typing it all up and locating all the sections, which had been in storage for years.  Last year, we staged a public reading of the piece [in a pedestrian walk through between West 42nd St. and 43rd St. near New York’s Times Square]. That lead to Peter Carlaftes and Kat Georges (Three Rooms Press co-directors) seeing it and deciding to publish it.

Were you there for the events Malina describes in Full Moon Stages? And what were your thoughts when you saw those events spoken of in this book?

For me, Full Moon Stages is palimpsest of my life in the Living Theatre.  It’s a shorthand flash of the whole forty some years for me. She paints with a quick and magical brush and brings it all back for me. We did change the name of the piece for the publication, with Judith’s permission. She was very happy to know it was going to be published.

Judith was an impassioned force, always doing the work of writing the next play, finding the right way to define the present state of resistance to violence and oppression. She was relentless; she was in a permanent state of emergency, but with great love.

Do you have any stories you want to share with our readers from your time with Judith in the Living Theatre?

When I first met Judith in Ouro Preto in Brazil she took me into a doorway to shelter from a sudden rain and rolled a joint with one hand. I was impressed with that. She got terribly angry with me one morning in Brazil, saying that my diary, which I had lent her, was self-centered and elitist and so forth. I was in tears. I never had an argument with her after that. I always worked hard to please her.

Along those lines, do you have any advice for new actors or creative types?

Use anything to realize your creativity. But make sure you know what you want to say; you must have something to say; otherwise, leave it to someone else.

What is your favorite book or stage play?

I have always liked the Living Theatre work. And beat poetry. I was also very taken with the work Reza Abdoh and his Dar A Luz theater group.

What are you reading right now?

I’m applying for a Fulbright to go to Italy and organize Living Theatre archives over there. I’m also working on a memoir called I Think I’m Still Here/I Wonder Why about my life in the Living Theatre. The title comes from a line in Antigone that I always said in my role as the Guard. The introduction to this memoir will be published in the December issue of Performing Arts Journal. And we will be working on the next Living Theatre play.

That’s fantastic. We wish you all the best of luck. We traditionally end each interview with a “Making of” playlist. Can you make us a Full Moon Stages music playlist?