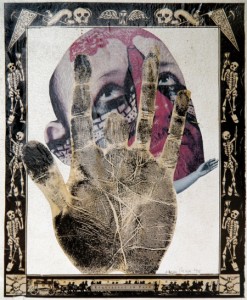 Requiescat in Pace by Mary Beach 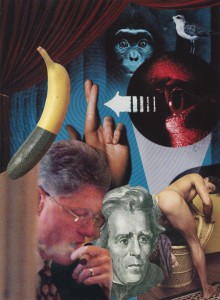 Two original cut-up dada collages by two renowned 20-century French artists are currently up for auction by Three Rooms Press. The two artworks, CLINTON, by Claude Pélieu and REQUIESCAT IN PACE by Mary Beach are both represented in the latest edition of MAINTENANT: A JOURNAL OF CONTEMPORARY DADA WRITING AND ART. The actual artworks are both signed by the artists and are representative of their classic style of juxtaposing seemingly unrelated images to create a brilliant new perspective. The work of both artists is revered in France, and is becoming increasingly collectible in the U.S. Last year’s auction of a single collage by Claude Pélieu was a great success and we are thrilled to be able to offer two extraordinary pieces for this year’s dada celebration.

Each piece will be auctioned separately. Winners will be announced June 17.

To enter the auction for REQUIESCAT IN PACE by Mary Beach, or CLINTON by Claude Pélieu, send an email with your name, address, phone number, and bidding amount to: info@threeroomspress.com. Bids may also be submitted at any one of our three June Dada events: June 5 at Cornelia Street Cafe NYC, June 10 at Le Poisson Rouge NYC, and June 13 at Beyond Baroque, Los Angeles, CA. All bids must be received no later than June 16, 11:59 p.m. Should a higher bid come in after you have sent in your bid, you will be notified immediately via email, and given an opportunity to rebid.

About Claude Pélieu and Mary Beach
Claude Pélieu: was born in 1934 in Beauchamp, Val D’Oise, France. The first of his many shows was at the famed Galerie du Haut Pavé, in Paris. While living the life of a young French artist in 1950’s Paris, Claude continued to work and exhibit (at the Le Soleil dans la Tête, in Paris; the Galerie Alphonse Chave, in St. Paul de Vence. Although largely self taught, and greatly influenced by artists such as Marcel Duchamp, Max Ernst and Kurt Schwitters, Claude did deviate from the “bohemian norm” long enough to study under Fernand Léger.

In 1962, in Paris, Claude met Mary, and they soon departed for San Francisco: Mary had given Claude a copy of Allen Ginsberg’s Reality Sandwiches, the two artists had corresponded with the Beat poet — had shown him some of their work and Claude’s poetry — and, with poet/publisher Lawrence Ferlinghetti’s encouragement, they left for America. In San Francisco the two quickly found themselves in the midst of the flourishing West Coast art scene, and struck up lifetime friendships and creative associations with Ferlinghetti, Ginsberg and Charles Plymell (poet and printer first volume (Vol. 0) of Zap Comics. Soon after, in 1965, they left for New York City where they lived and worked for a year, then returning to San Francisco until 1968 when they returned to Paris just as the events of May exploded across France.They returned briefly to San Francisco before moving to New York City, spending all of 1969 living at the Chelsea Hotel, where they became friends and worked with such writers and artists as William Burroughs, Ed Sanders, Patti Smith, Robert Mapplethorpe, and Harry Smith,who would later live with them for a time when they decamped to upstate New York, to Cooperstown, in the 1980’s.

Other travels followed (to England, France and back again to the US); other artistic collaborations flourished (with William Burroughs, Brion Gysin); and different mediums were explored (writing poetry – Pilote Automatique, published by City Lights; French translations of Burroughs and Ginsberg; illustration) — yet throughout all this time Claude continued with his collages, exhibiting at various galleries in Paris and Caen; at the Mohammed Gallery in Genoa, Italy; at the Biennale de Sao Paolo in Brazil; the Centre Pompidou, Beaubourg in Paris; the Suzan Cooper Gallery in New York.

Claude and Mary wed in 1975, and finally settled in upstate New York — first in Cooperstown, then in the nearby small town of Norwich. It was there that the two quietly lived and constantly worked. Claude and Mary were always exploring, always experimenting, and always finding new ways to deconstruct and reinterpret the world. Claude passed away on December 24, 2002. Mary passed away January 25, 2006.

For more information about the work of both of these artists, visit The Beach-Pelieu Art Website.