↓
Home→interviews→Talking Writing, Identity, and Music with Meagan Brothers
Share This! 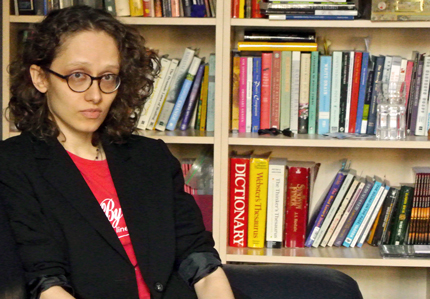 In celebration of Meagan Brothers’s kick-ass reading at our 3RP Meet & Greet on April 30, we’re sitting down for a discussion with this inimitable author of the upcoming Weird Girl and What’s His Name. Meagan Brothers is also the author of Supergirl Mixtapes, which was a 2012 YALSA Best Fiction for Young Adults nomination, and Debbie Harry Sings in French, which was an ALA Best Book for Young Adults, won a GLBT Round Table ALA Award, and was named a New York Public Library Book for the Teen Age. She was also the founder and lead guitarist for the punk rock band Steel Pier Sinners.

3RP: We’ll start of with the usual question. What are you reading right now?

MB: I just started re-reading the Hitchhiker’s Guide series by Douglas Adams, which I haven’t read since I was a youngster. Still funny!

What’s your favorite book (aside from the ones you’ve written!)?

I only get one? Probably Dandelion Wine by Ray Bradbury. Rounding out the top five, though, I’d say Sometimes a Great Notion by Ken Kesey, Play It As It Lays by Joan Didion, Infinite Jest by David Foster Wallace, and Toons for Our Times by Berke Breathed.

Haha, I don’t think anyone else has been able to answer that question with only one choice either. So let’s swap over to writing. What makes you want to write?

Hmm, good question. It’s been this compulsion since I was a kid, to make up stories and write them down. I guess I keep doing it because, egotistically, I want to entertain people. But also, ultimately, you want to connect, to relate. A good friend of mine from college said the nicest thing about my last book, Supergirl Mixtapes; she told me that it made her feel seen. It made me think about how, even with all the zillion channels and Internet video and everything, there are so many people who don’t see themselves in mainstream media, and they don’t feel like the mainstream is seeing them. It made me think about the kind of girls that we were in college, and our friends—baby artists, queer kids, enthralled with punk rock, reading poetry, hanging out in a dorm room watching a bootleg VHS of Decline of Western Civilization. I want to write books for those kids, the ones who would rather make art than go to a frat party. Back in high school, even my teachers called me weird. But so what? There are a lot of us who don’t fit into whatever the overriding idea of The Norm is. So, I guess I want to write just to say hello to my fellow weirdos. Hi, weirdos. I see you. You see me. We’re not alone out here. It’s gonna be okay.

You sum up that last idea pretty beautifully in your new book, Weird Girl and What’s His Name (October 2015), when Lula says, “So, what you’re telling me is, not only are there no normal people on this planet, but nobody’s even figured out how to pretend?” That’s a line I wish I’d read back in high school, but it’s a timely reminder for today’s adult readers as well.

Along a similar line, do you have any advice for new writers?

How about when you write? Do you have any writing rituals?

I am embarrassingly undisciplined. But I try to maintain some aspect of my current project, even when I’m not actively writing. One of my tricks is to make playlists for characters or scenes, so that I can play them on the way to work, or while I’m out running errands. It helps me stay in the world in my head, even if I’m not able to have a full sit-down-and-write day.

So what were your reasons for creating Weird Girl and What’s His Name? How did you decide to start writing it, and what kept you motivated to finish it?

I wrote the first paragraph of the book way back, probably sometime around 2006, 2007-ish. I remember writing it in my car somewhere on the Jersey Turnpike, and all I remember is that I had this vague idea about a kid dealing with his alcoholic mom. But I’d already touched on that in my previous books, and I wasn’t sure I had any new insights on growing up with an addict. So I abandoned it for a while, but it remained this nebulous idea in the back of my mind that maybe it was really a story about friendship between these two characters, Rory and Lula. Maybe I just liked their names.

Anyway, in the summer of 2008, I went to see the second X-Files movie, I Want to Believe. Not really thinking it was going to impact my life in any huge way; it was just a thing to do after work on a Friday night. I had been a huge, huge fan of the show back in the day, but the last few seasons happened while I was graduating from college and moving to New York and finding a job, so I’d missed a lot and kind of drifted away from it. But seeing the movie brought back all these great memories of watching it with my friends and family, how we’d hunker in and have Pizza and X-Files Night at my house. It may sound silly to say that this TV show was a bonding experience, but it was! Somehow that linked up with this abandoned paragraph in the back of my head, and, instead of finishing these Supergirl Mixtapes rewrites like I was supposed to be doing, I puked out this story called Bloom Orphan instead. It happened really fast, in about two weeks. It was a shorter version of what is now Rory’s half of the book. But, at forty-odd pages, single-and-a-half spaced, it was too long to be a short story, too short to be a novella. I didn’t know what to do with it. So it was abandoned again.

Then, in 2009, I had to get honest with myself and admit that the adult book I’d been trying to write was going to take more research than I had money and time for. I kept coming back to the idea of that too-long short story, but I wasn’t sure where to go with it. My initial idea was that Rory would uncover all this wild, lurid stuff that Lula had been up to without telling him, but then I realized I was just rewriting Twin Peaks. I wrote a lot of lousy, false-feeling pages and kept ripping up and starting again until I found a version of Lula that was more realistic (for me, anyway). I think it started with the idea of opening the second half with her alone in her room, binge-watching TV, and her realizing she’d kind of had enough. The second half of the book fell into place fairly quickly after that.

Got any current projects you’re working on?

Haha, silly question really! It sounds like even when you’re not actively working on a story, you’ve got a few on the backburner. And now, last question: What do you for fun that’s not writing?

Meagan’s playlist from the Writing of Weird Girl and What’s His Name.

Here’s a 21-song sampler version of the 59-song playlist I made to listen to while I worked on the book. Spotify your hearts out, y’all: