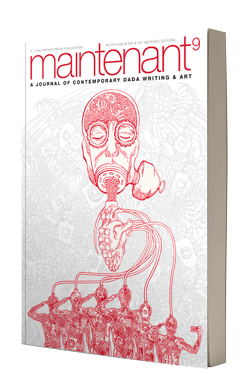 The latest issue of MAINTENANT: A Journal of Contemporary Dada Writing and Art has hit the newsstands—for the first time ever, in full color! We thought it might be a good time to offer some background on DADA and what makes it so special to us.

The original Dada movement started in Zurich, New York and Paris in 1915-16 and grew from a feeling of desperation in the face of World War I. Many Dadaists believed that the “reason” and “logic” of a bourgeois capitalist society had led people into war. They expressed their rejection of that ideology through artistic expression that appeared to reject logic and embrace chaos and irrationality. In addition to being anti-war, Dada was also anti-bourgeois and anarchist in nature. Tenants of the movement continue through today.

Three Rooms Press draws much of its inspiration from Dada and its legacy, including the beat movement, punk rock, pop art and the underground poetry and artscene. Three Rooms Press is particularly inspired by the life and work of Arthur Cravan.

Arthur Cravan was a pugilist, poet, larger-than-life character, and idol of the Dada and Surrealism movements (as well as the nephew of Oscar Wilde). In 1913, he published the original Maintenant, widely-recognized as the first “zine” ever. The current Maintenant series by Three Rooms Press was developed in homage to his original creation. During the course of a short and spectacular life, Cravan wreaked havoc on himself and three continents in an escalating frenzy of artistic mania. He arrived in New York in 1914 where he met the poet Mina Loy, then moved with her to Mexico three years later when the United States entered the war. In 1918, he set out on a sailboat from Mexico to Argentina and never arrived. His disappearance has been the source of broad speculation.

For more information on MAINTENANT 9, including ordering and details on past issues, click here.