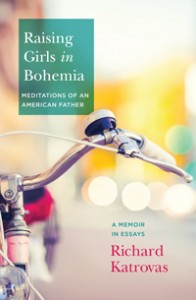 As well they should be! Katrovas’s insightful collection of essays, Raising Girls in Bohemia, received a rave review in the October 17 issue of Shelf Awareness.

Raising Girls in Bohemia is by turns political and personal, honest and full of insight into the human condition, all filtered through a poet’s thoughtful lens.

The complete review can be read on Shelf Awareness‘s website, here.

Plus, MLive.com published a feature article on Katrovas:

Western Michigan University English professor Richard Katrovas has released a collection of essays about his childhood and raising his daughters in two countries.

Raising Girls in Bohemia can be purchased here: