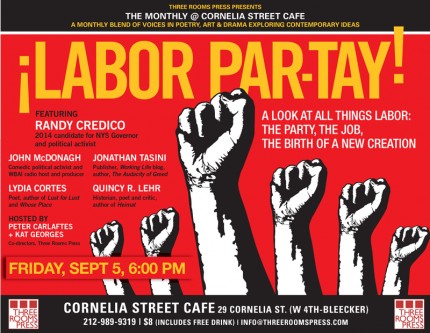 Keep the spirit of Labor Day going (and maybe make summer last just a little bit longer!) as Three Rooms Press presents Labor Par-tay, the latest edition of The Monthly, with performances  about all things labor: The Party, The Job, The Birth of a New Creation.

Jonathan Tasini publishes Working Life, which he started a decade ago as one of the original blogs devoted solely to work and the economy. He also has written for a wide variety of dead-tree magazines and newspapers and has also served as president of the National Writers Union for 13 years. He is the author of The Audacity of Greed

John McDonagh is a comedic political activist and radio host and producer.  From the front seat of his yellow cab, he has been driving New York City crazy for thirty years.

Lydia Cortes is a Williamsburg-born rican and author of two poetry collections, Lust for Lust and Whose Place. Her next collection will be called either Park Avenue, Brooklyn, or Rice and Beans Sandwich.

Quincy R. Lehr is a historian specializing in late nineteenth-to-early-twentieth-century social and political history, as well as a poet and critic. He has published widely in both prose and verse, and his most recent book, Heimat, is a long poem fusing his historical and literary concerns. He lives in Brooklyn and is the associate editor of The Raintown Review.

LABOR PAR-TAY is the latest installment of The Monthly at Cornelia Street Cafe, a unique series curated by Three Rooms Press that brings together leading poets, intellectuals, performers and rebels on a different topic each month. THREE ROOMS PRESS is a New York-based, fiercely independent publisher inspired by Dada, Punk and Passion. CORNELIA STREET CAFE is a Greenwich Village institution offering live jazz and literary events 7 nights a week, plus delicious food and superb drinks.