About THE WRITERS AFTERLIFE 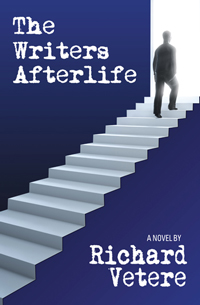 THE WRITERS AFTERLIFE, a novel by Richard Vetere

THE WRITERS AFTERLIFE is a truly original, hilarious and triumphant tale of a writer given one last chance to realize his lifelong dream – after he dies. Tom Chillo, a 44-year-old writer with two novels under his belt, plus countless hack survival jobs, dies suddenly and is faced with one chance to return to earth for one week and set the wheels in motion to achieve eternal fame for his true life’s work. Failure is not an option.

Pre-publication raves have been universal. Adriana Trigiani, author of The Shoemakers’s Wife, notes, “THE WRITERS AFTERLIFE is an original, hilarious and poignant tale of second chances, the role of fate plays in our lives, and the triumph of the creative spirit.” And Anthony Tamburri, dean of the John D. Calandra Italian American Institute, enthuses, “THE WRITERS AFTERLIFE is a literary tale in every sense of word, a wonderful story of perseverance and taking control of one’s own fate.” And Israel Horovitz noted in Newsday, “Richard Vetere is a man with a writer’s soul!”

Author Richard Vetere is has written more than 30 plays which have been performed worldwide. His 1997 novel, The Third Miracle, was made into the namesake 2000 film produced by Francis Ford Coppola and starring Ed Harris and Anne Heche.

Writer Israel Horovitz has written more than 70 plays, several of which have been translated into 30 languages and performed worldwide. His Obie award-winning play, The Indian Wants the Bronx, had its world premiere in 1968 with a cast that featured Al Pacino and John Cazale. Horovitz is currently in post-production as writer and director on the film based on his stage-play, My Old Lady, which stars Kevin Kline, Maggie Smith and Kristin Scott Thomas.

About LIGHT OF THE DIDDICOY 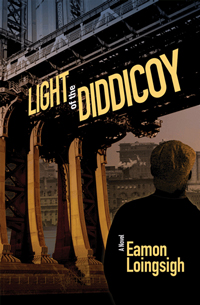 LIGHT OF THE DIDDICOY, a novel by Eamon Loingsigh

LIGHT OF THE DIDDICOY is the brutal saga of Irish-American gangs on the Brooklyn waterfront in the early part of the twentieth century, told through the eyes of Irish immigrant Liam Garrity. Forced at age 14 to travel alone to America on the eve of the 1916 Easter Rising, Garrity stumbles directly into the hard-knock streets of the Brooklyn pier neighborhoods run by Bridge District gang The White Hand. In the industrialized enclaves where Famine Irish settled a generation earlier, Garrity has no choice but to use any means necessary to survive within the clan-like loyalties of the gang.

The book has received widespread pre-publication praise from early readers, including McCourt, who raves, “LIGHT OF THE DIDDICOY is an amazing series of literary leaps from terra firma into the stratosphere above. The writing embraces you, and his description of the savagery visited on poor people is offset by the humor and love of the traditional Irish community. Don’t leave the store without this book.”  T.J. English, author of Paddy Whacked and The Westies, enthusiastically applauds the book, saying “LIGHT OF THE DIDDICOY is written with tremendous flavor and panache. Historical fiction at its best.”

And Alphie McCourt, author of Heartscald, notes, “Eamon Loinsigh is a poet with a pickaxe and a scalpel attached to the working end. Mr. Loingsigh, the meticulous historian, paints a rich picture. Mr. Loingsigh, the novelist, tells it like it was. LIGHT OF THE DIDDICOY is a great read.”

Author Eamon Loingsigh is a journalist with a long-held fascination for the Irish-American New York City experience. His family emigrated from Ireland in the late nineteenth century and his grandfather and great-grandfather ran a longshoreman’s saloon on Hudson Street in Manhattan for much of the twentieth century. LIGHT OF THE DIDDICOY is his first full-length novel.

Three Rooms Press is a New York-based publisher and performing arts producer, founded in 1993. Since its inception, it has served as a leading independent publisher of creative content, including poetry translations, drama and art sourced from the burgeoning international spoken word, music and underground art scenes. In 2011, it expanded its publishing line to include cutting edge work in fiction, creative historical nonfiction, memoir, photography and art and all books are now available via the world’s largest distributor, PGW/Perseus. In addition, Three Rooms Press produces and promotes a variety of literary and cultural events in New York, Paris, Berlin, London, San Francisco, Los Angeles, and more, including readings, plays, workshops and concerts. More info: http://threeroomspress.com