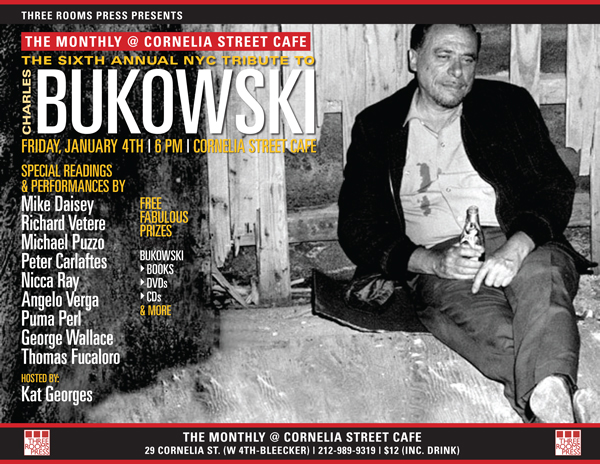 Celebrate the start of the new year with the 6th annual Charles Bukowski Memorial Reading–held on the first Friday of the new year since 2008–Friday, January 4, 2013, 6 pm at Cornelia Street Cafe.

Poet Charles Bukowski was truly one of the few and far between: a champion of the outsider, the lost and lonely, the outcasts from society. During this ongoing period of economic uncertainty and working class adversity, his work resonates like none other, stripping the human soul bare with humor, style and a bottle of beer.

What would Bukowski think about the fiscal cliff? How would he feel about the demise of the US Post Office? Would Buk have a Twitter account?

At this tribute reading, we’ll show videos of Bukowski, plus giving away Buk books, CDs, DVDs and other prizes.

Doors open at 5:45. Admission is $12 which includes (naturally) a free drink! Arrive early to sign up on the reading list, or just come and enjoy the fun. Cornelia Street Cafe is at 29 Cornelia Street, in the West Village, between W. 4th Street at Bleecker (http://corneliastreecafe.com).