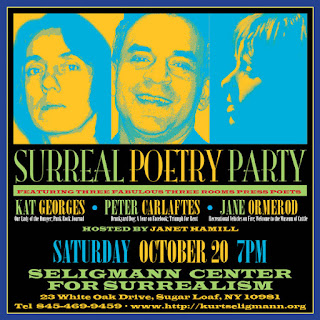 PETER CARLAFTES is a New York-based screenwriter, playwright, actor, poet, and director. He is the author of 12 plays, including a noir treatment of Knut Hamsun’s Hunger, and the celebrity rehab center spoof, Spin-Dry. He has appeared in numerous Off-Broadway productions, including his comic solo performance piece, Lenny Bruce: Dead & Well, as well as Barefoot in the Park and Stephen Adly Guirgis’  Den of Thieves. As an author, Carlaftes has penned three books: A Year on Facebook (humor), Drunkyard Dog (poetry) and Triumph for Rent (3 plays). He is a co-founder and co-editor of Three Rooms Press.

KAT GEORGES is an NYC poet, playwright, performer and designer. In New York since 2003, she has directed numerous Off-Broadway plays, curated poetry readings (including the bi-monthly Son of a Pony poetry reading series at Cornelia Street Cafe), and performed widely. She is co-founder and co-editor of Three Rooms Press; their most recent books include Maintenant 6: A Journal of Contemporary Dada Writing and Art; Have a NYC: New York Short Stories; and Mike Watt: On and Off Bass, a collection of photos and distilled tour diaries from the great punk rock bass player. Her most recent book is a full-length poetry collection, Our Lady of the Hunger.

JANE ORMEROD is the author of the full-length poetry collection, Recreational Vehicles on Fire (Three Rooms Press, 2009), the chapbook 11 Films (Modern Metrics, 2008), and the spoken word CD Nashville Invades Manhattan. Born in England, she now lives in New York City and performs extensively across the United States and beyond—San Francisco, Boston, Philadelphia, Salt Lake City, Britain, Canada, Ireland, and The Netherlands to name just a few places. She is a founding editor at great weather for MEDIA.