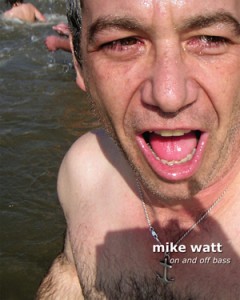 In “Mike Watt: On and Off Bass,” photographs that appeared in the exhibit are punctuated by Watt’s poetry and snippets selected from 10 years of his diaries. Watt’s writing is insightful, funny, intimate and honest, as he explores topics like John Coltrane, long hauls and overcoming performance fears.