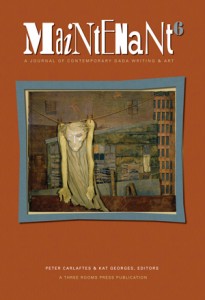 It’s back! And better than ever: The fifth annual Dada Poetry & Art Salon, with Dada hostess KAT GEORGES! This year’s theme: Declare Art on War!
Wear your favorite Dada fashion, thrill to the excitement of the strangest, most hard-hitting Dada performances ever, and enjoy Dada-inspired poetry read LIVE! from the latest edition of Maintenant: A Journal of Contemporary Dada Writing & Art* (Three Rooms Press, 130 pages, 2012).

Doors open at 5:45. Admission is $7 which includes (naturally) a free drink! Cornelia Street Cafe is at 29 Cornelia Street, in the West Village, between W. 4th Street at Bleecker (http://corneliastreecafe.com). Reservations and additional information: threeroomspress@mac.com