↓
Home→Tour Info→Poets B.R. Lyon & Billy Cancel set to Thrill at Son of a Pony 3/2
Share This! 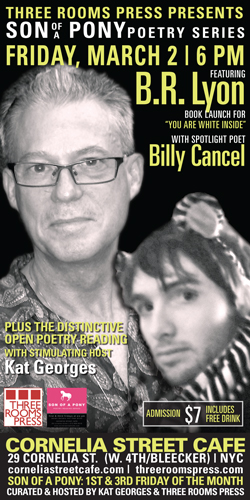 Three Rooms Press is pleased to present Son of a Pony, with special featured poet B.R. LYON celebrating the release of his new Three Rooms Press book, You Are White Inside, on Friday, March 2. Lyon will be going by spotlight poet BILLY CANCEL, and both readers will follow NYC’s most provocative open poetry reading, hosted by Kat Georges.

Poet, fiction writer, and musician B. R. LYON splits his life between Brooklyn and Egypt. He recently gave up twenty-five years of adminis-tration in juvenile justice and clinical social work practice, leaving it to others to work out their problems while he ponders his own. His other publications include a chapbook, Your Infidel Eyes (Poets Wear Prada Press, 2006), and his ‘poemusic’ CD, Beauty Keeps Laying Its Sharp Knife Against Me (Logochrysalis Productions, 2008). He is an editor for Great Weather For Media, and is the founder and producer of Hydrogen Jukebox, a New York City reading series that combines poetry with music, which, besides his life partner, are his greatest loves.

The featured reading follows the renowned Son of a Pony open reading at the cafe, hosted and curated by the dynamic Kat Georges. Doors open at 5:45 p.m.;  open reading begins at 6 p.m. Admission is $7, which includes a free drink.